Amazon CloudWatch is a monitoring service for applications running on AWS. It collects data (in the form of logs, metrics, and events) from running AWS instances, stores this data in a repository, and provides a dashboard that allows users to visualize this data and monitor the behavior and performance of running applications, detect anomalies, and possibly set alarms or take automated actions. This service can be a useful tool for systems engineers to optimize resource utilization, troubleshoot issues, and gain insights to improve the overall behavior of a cloud service.

Some of the data collected by CloudWatch (such as CPU utilization, network data transfer and disk usage metrics from AWS instances) are generated automatically by the AWS infrastructure, without any active involvement from applications running in the instances. For other types of data (such as application logs, or memory utilization), running applications must actively send the data of interest to CloudWatch, using a web API. Amazon has a reference implementation of a CloudWatch client application, referred to as the CloudWatch agent, which, when installed in an AWS instance, runs in the background alongside the other applications deployed in the instance, collects data from interest (either from running applications, or from the operating system), and sends this data to CloudWatch.

Our CloudWatch klib periodically samples memory utilization metrics and sends them to Amazon CloudWatch as custom metrics, similarly to what the Linux CloudWatch agent does; more specificaly, the metrics being sent are (refer to the Linux CloudWatch agent documentation for a description of each metric) mem_used, mem_used_percent, mem_available, mem_available_percent, mem_total, mem_free and mem_cached. These metrics are defined as standard-resolution metrics (i.e. they are stored in CloudWatch with a resolution of 60 seconds), and have an associated dimension whose name is host and whose value is an identifier of the AWS instance from which they originate, formatted as ip-<private-ip-address>.<aws-region>.compute.internal (for example, ip-111-222-111-222.us-west-1.compute.internal); for background information on how metrics are published to CloudWatch, refer to the CloudWatch documentation.

The rest of this section describes how to deploy to AWS a Nanos application with CloudWatch support.

In order for an application to be able to send data to Amazon CloudWatch, it needs appropriate permissions. These permissions can be granted via policies assocated to IAM roles; if a given instance is associated to an IAM role with specific permissions, all applications running in the instance are able to retrieve the security credentials that are needed in order to access AWS resources that require those permissions. For CloudWatch, the permissions required for publishing data from an instance are represented by a policy called CloudWatchAgentServerPolicy. Thus, the first step is to create an IAM role with this policy, as explained in the AWS documentation. Take note of the name of your IAM role, because it will be needed when configuring a Nanos instance.

Now we can deploy to AWS an example unikernel image with CloudWatch support. The following Go code implements a simple web server: Assuming the above code is saved to a file named "webg.go", to build an executable file (which will be named "webg") type the following: Now we can create the AWS image: In the above command, "config.json" is the name of the configuration file previously described. Once the image creation and upload process is complete, we can deploy an instance:

Now that we have a running instance, we can go to the CloudWatch Management Console in the AWS portal and retrieve the metrics published by the instance. From the left menu of the management console, select Metrics -> All metrics; then, our metrics can be found under the CWAgent namespace (i.e. the same namespace as used by the Amazon CloudWatch agent); after selecting this namespace, a host dimension should appear: selecting this dimension will list all metrics published by the instance, which can then be plotted or processed otherwise, as exemplified in the following screenshot: 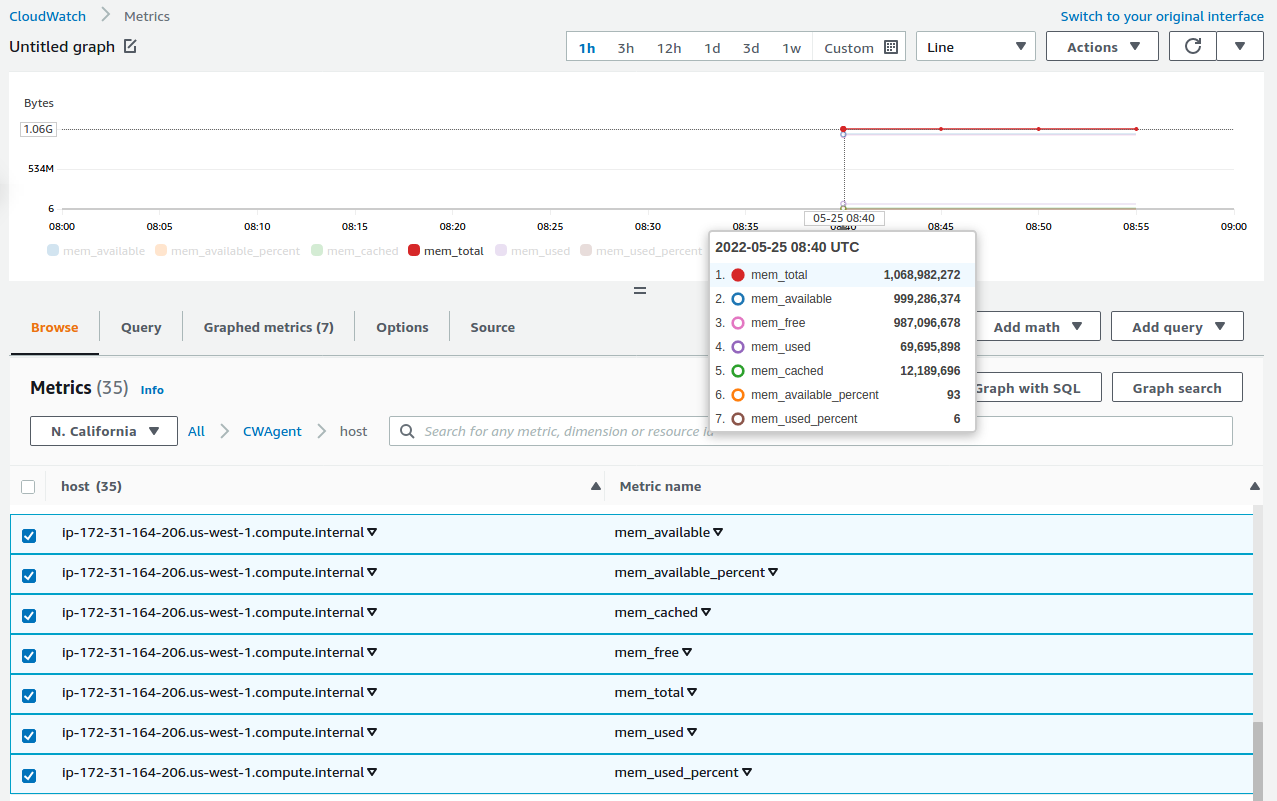